It’s been this kind of weather in Londra. 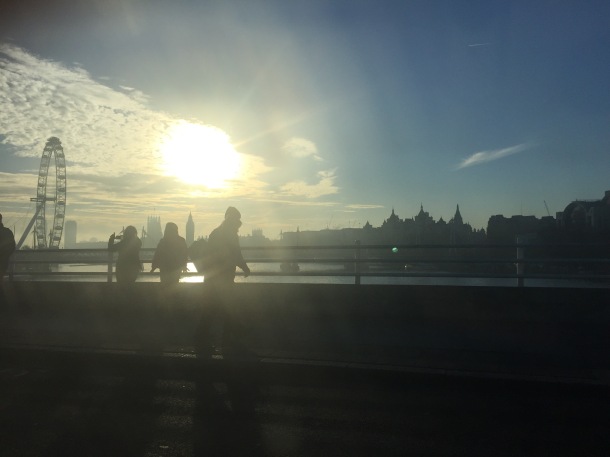 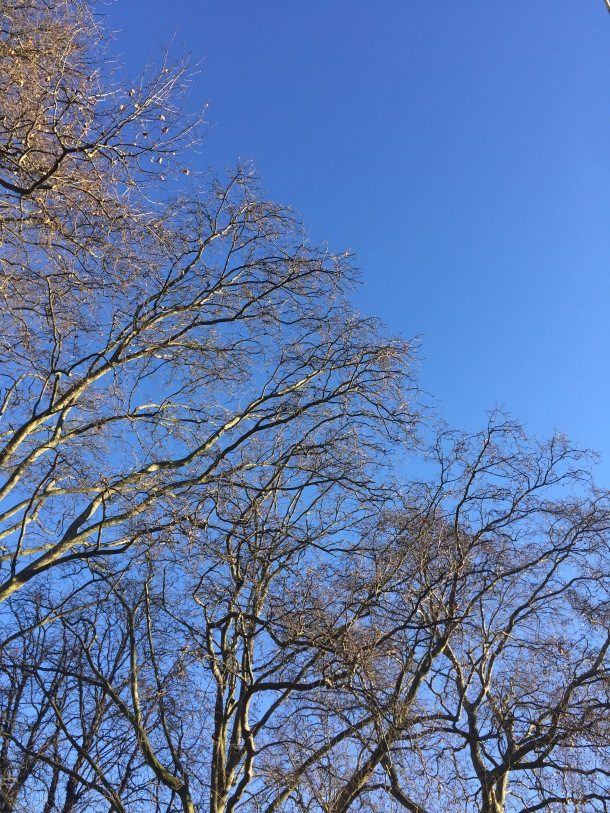 Amazingly, no rain. Also none of that misty greyness hovering just above one’s head like a levitating fascinator. 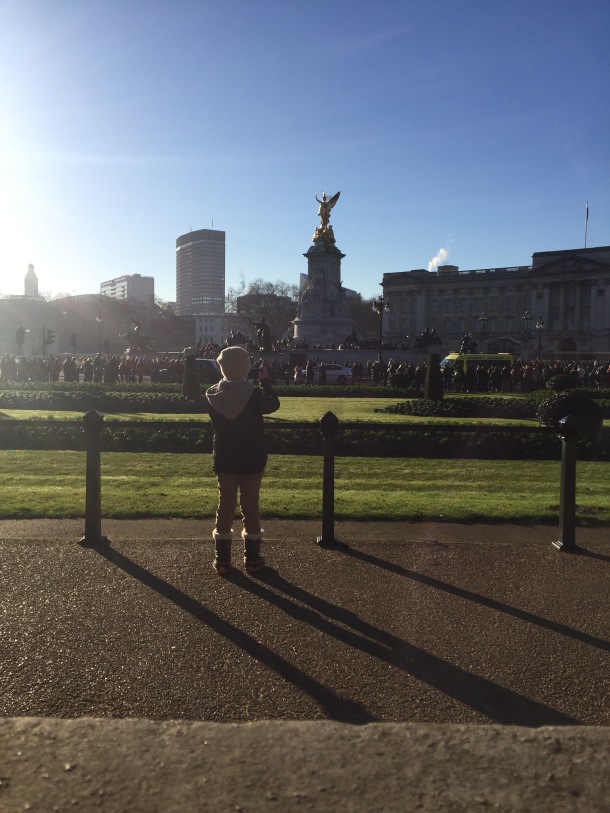 As this is like a second home for the Trivialista-Seriousimos, we don’t often do the touristy bits. But while Seriousimo rested, we popped by Buckinghome Palazzo to join the throngs from Ye Olde Europa who might soon not be quite so welcome here post-Brexit. Everyone with form knows Elizabeth Regina’s at Sandringham at Chrissy, rather than here. But still they wonder about it, aloud, in a rainbow collection of languages. 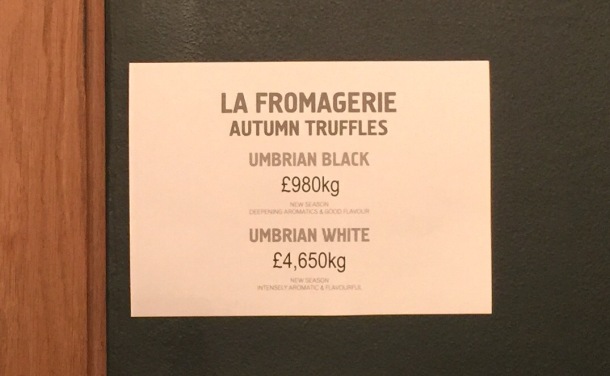 Have my old Bane of Bris buddy Shallot and her famiglia coming for lunch, so popped into La Fromagerie to fondle some formaggios. Decided against the Umbrian white truffles, for now. That’s about three Célines per kilo. 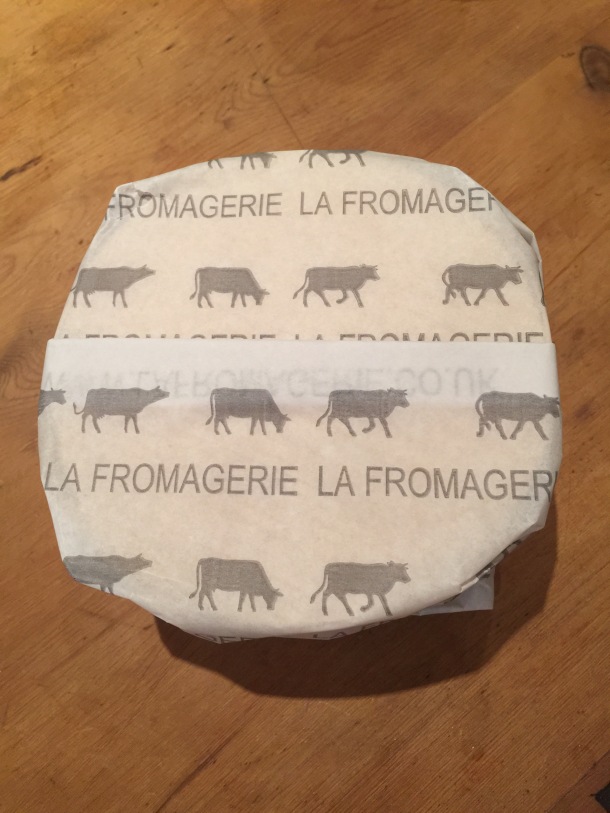 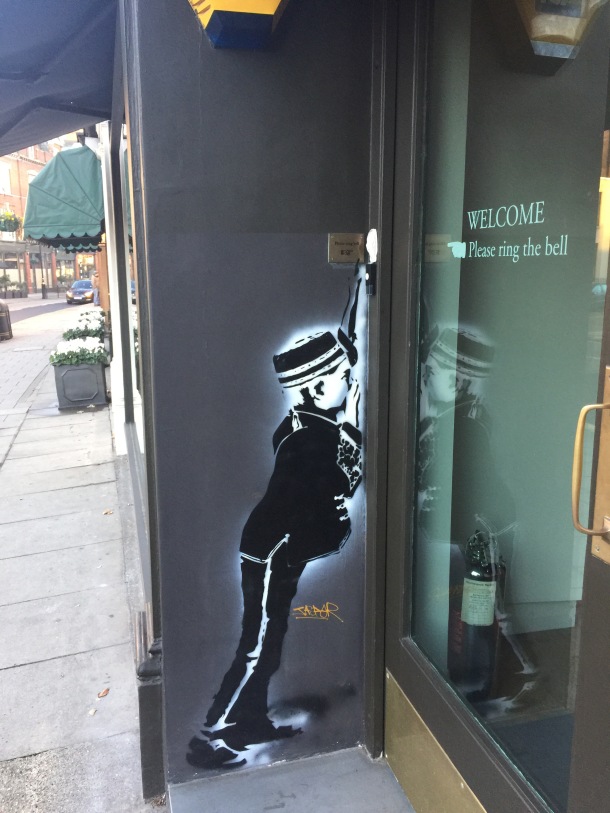 La wandered down Pimlico Road, early. Spotted a Banksy. Had a coffee at Daylesford. That place is such a wanky triumph of packaging over content. Love that a family that made its money from heavy machinery is now all preachy about crunchy-granola-save-the-earth-organic-or-die practices. *Spot the grumpy jetlagged Antipodean*. And their coffee was bitter. 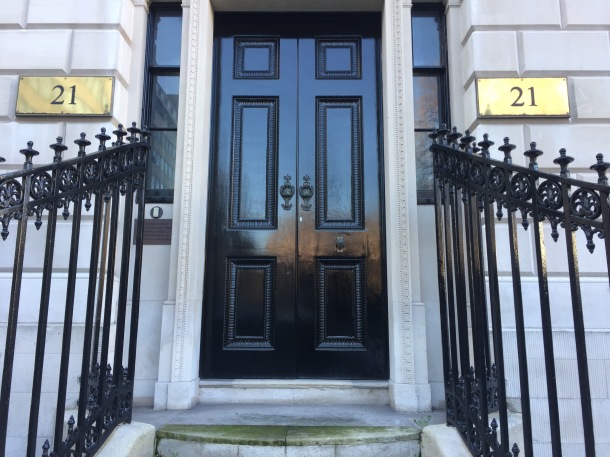 Visited my old haunt, the site of my first job in Londra in 1994. (That’s if you don’t count my couple of months with @Blackmorelife writing ad copy for ‘seccie’ jobs. “Pop the corks – we have champagne opportunities for you!” was a high point of our oeuvre.) The old Grand Met (now Diageo) HQ in St James’s Square. This was where La worked for one of Prince Charles’s charities, and got to meet that great farmer with the sausage-like fingers and crazy blue eyes a few times.

What a welcome to Londra that was. More than 20 years on, the pull still pulls. Gods how I love it here. 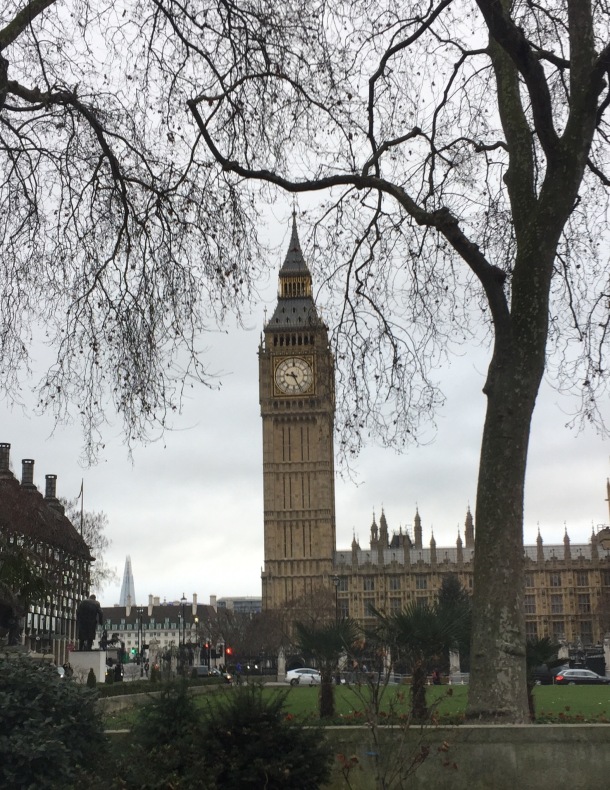 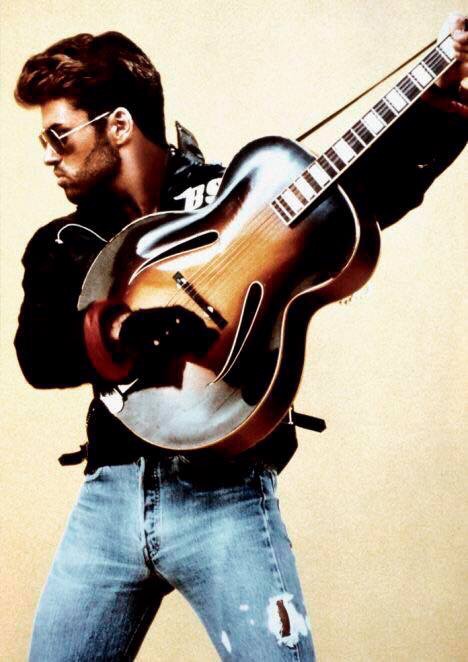 Began morning the loss of old Georgios. That was a Yuletide sucker punch, non?

George was my special guy since all that time ago when he looked longingly into my eyes – MINE, not yours – from the big screen at the Gosford Blue Light Disco and reassured me that “it’s cold out there, but it’s warm in bed…”. I barely knew then that bed was for anything other than sleep and reading Sweet Valley High by torchlight under my doona. But I knew things would be sweet in bed with Georgios. How right I was!

When La first moved to Londra in my K-mart ‘coat’ (wafer-thin; looked like it had been bequeathed to me by an unemployed Durham miner) and leather Reeboks in 1993, the title of my memoir was to be Finding George Michael. My residence was only to be considered a success if I clapped eyes – and hopefully claws – on him. I managed it, once, on Hampstead High Street, years after it had ceased to feel so important; years after it felt like Londra had become my town as much as Georgios’s. Wish I could bump into him now. 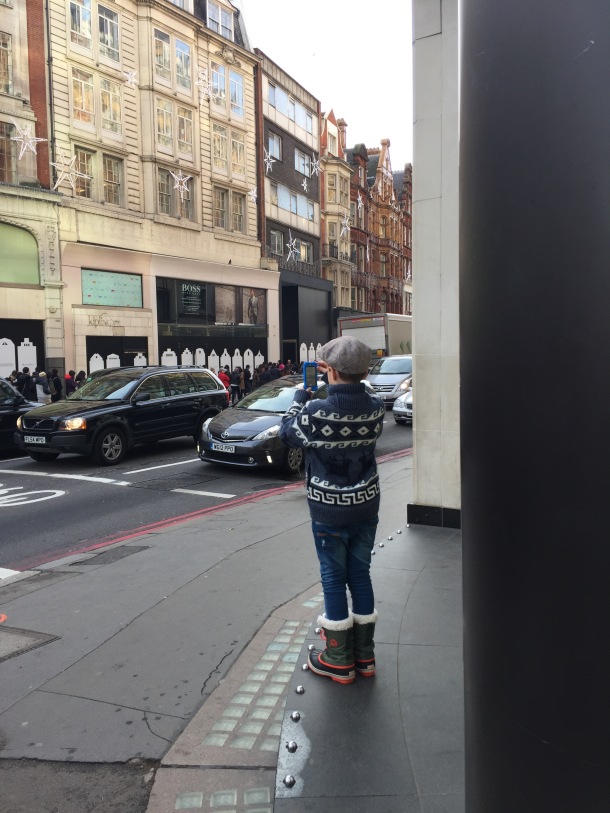 The male Junior Cost Centre (JCC) took some photos of the tourist nutbags lining up for the Harrods sale. Cray-town SW1.

Then me and the JCCs ined up too, suddenly deciding it wasn’t that harebrained of an idea after all. 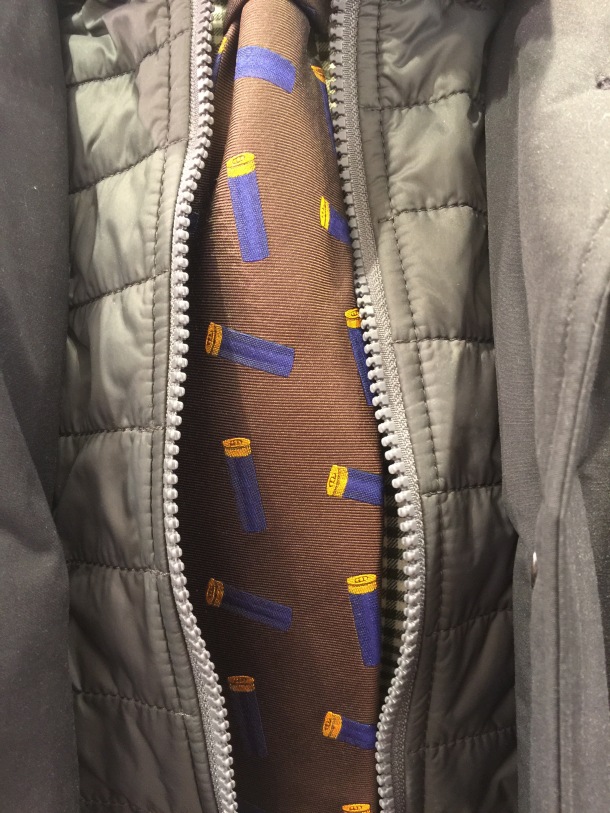 Thought about purchasing Seriousimo this charming Beretta tie, adorned with bullet casings. I shit you not. 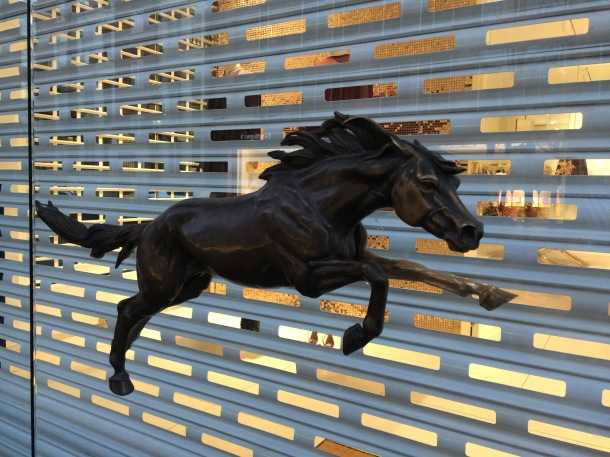 Fondled what is still my favourite doorknob of all time at Chloe. It’s an equine nod to the house’s former creative genius, Stella. 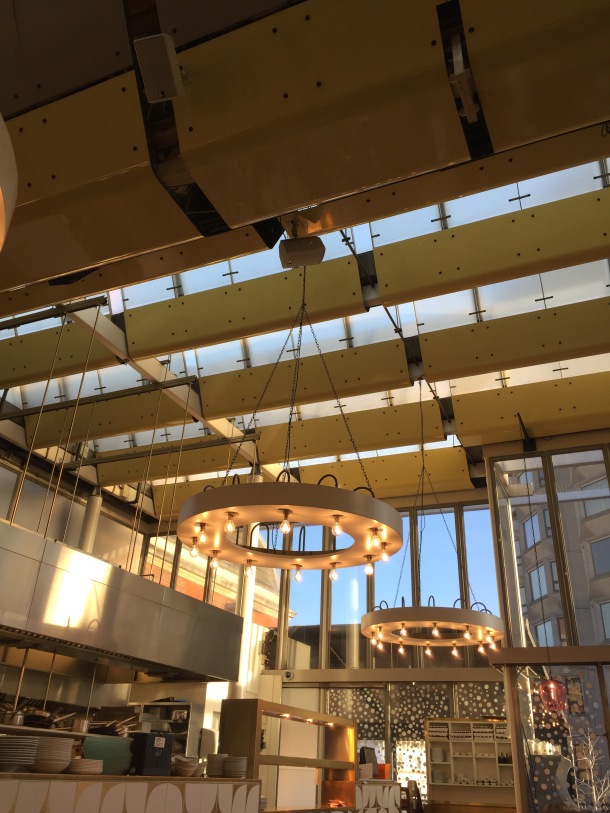 Retreated to the relative calm of Harvey Nicks Fifth Floor Café, an old family favourite. We shared jolly memories of the time we’d just deplaned from Sydney and the male JCC kept telling us he felt really sick and we kept telling him he was just jetlagged. Then we descended one floor and he vomited all over the Preen and Marc Jacobs. Ah, good times. 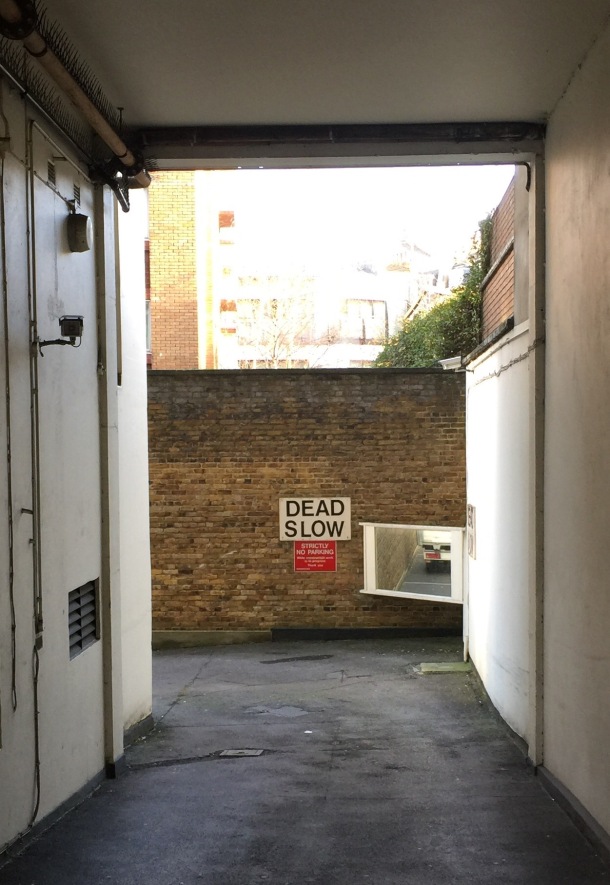 Here’s to 2016, the year that’s been slow and full of death. Let’s mount it on Stella’s bronze steed in less than a week and whip it off into the…who gives a shit where it goes, frankly. As long as it goes.