RSS Feed
← Vote 1: Seriousimo
I got a new air guitar →

Apparently, schools need money. Who knew (save Signor Gonski)? Faced with phalanxes of raffle tix, well-intentioned emails requesting volunteer person hours and Great Walls of entertainment books to be sold, La’s often been tempted to march into the office, flapping chequebook in manner of a white flag, screaming, “Just tell me how much a bloody electronic whiteboard costs!!!”

But those days are over. I’ve gone native. Now, I bake.

Does this photo make you as happy as it makes me? Behold la batter for la blueberry and sour cream cake, courtesy of La Martha. And because it’s wholesome Americana cakey fare, you can be sure it has more of everything than a beating heart needs in a lifetime: 340g butter; nine — yes, nine — eggs; and one pound (!!!) of flour. That made two cakeys, but both were huge.

Both Seriousimo and Cost Centres male and female were out, so it was just La, a wooden spoon and the batter. Happy, happy days *smiles dreamily*.

So off we went, cakes in tow, to the male JCC’s fête. Within the walls of our famiglia’s schools, Signor Seriousimo is nowt but a phantasm, a ghostly spectre, more myth than reality. (He finds it very hard to resist the siren call of the legal briefs.) In his ongoing absence from los school grounds, La took the opportunity to sign him up for as many stalls and barbie duties as possible before my pen ran out of ink.

Here he is (red hat), assembling some sausie sandwiches for the masses for the first time. It seemed like a rite of passage: now, he’s a real dad. 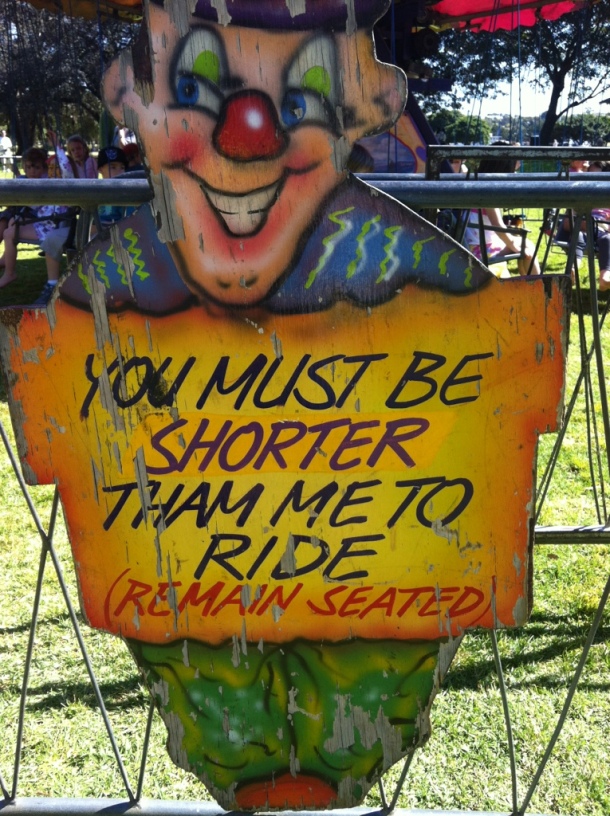 But I put aside my alarm over the spelling, hoping this ride would prove to be a triumph of engineering over grammar, and let the JCCs hop on. They lived. As my friend Ms Nic pointed out, “Everyone knows clowns can’t spell.”

La’s been a Mamma Trivialista for almost eight years now, and it still never ceases to amaze me the carny-built ‘traptions I’ll agree to allow los fruits of my loins to ride.

Posted in Uncategorized. Bookmark the permalink.
← Vote 1: Seriousimo
I got a new air guitar →