No — La Triv hasn’t been oogling old NWA and Beastie Boys vids at the Triv Media Control Console and dancing inappropriately for a middle-aged white woman.  This is the weekly news rundown, so you’re armed with insights and opinions for this weekend’s luncheons and soirées. 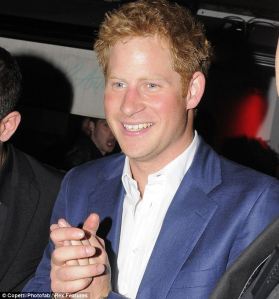 The Torygraph Decrees Harry Must Hurry and Marry.  Poor Haz.  There he is, sowing a wild oat here, a barley seed there…and the organ of his class wags a disapproving finger at his gooseberry status, even going so far as to say he’s begun to cut a sad and lonely single figure.  I dunno, but every time I see pics of him stumbling out of Mahiki in the early hours, ciggie in hand, shirt untucked and hair obviously post-pash mussed, he looks to me like he’s having a fine old time.

Jen and Justin Getting Hitched.  Well done to the lovebirds.  Of course, now the breathless column inches dedicated to what she’ll wear and when they’ll pop out a pup have begun to appear (like their single status was a barrier to having a baby).  Has anyone noticed the woman is 43?!?!  And have any of the celebrity tabloid media overlords considered for even a second that Jen may well have been struggling with infertility for the past 20 years?  Sheesh, don’t get me started on all this incessant Bumpwatch bull****.

“What I lack in years and grey hair I more than make up for in shiny wedding jewellery and amazing karate chop action.”

Next Possible Deputy Head of the Free World Scarily Close to La Trivialista’s Age.  Some may not consider this newsy current affairs, but La does.  The day your GP is younger than you is a scary one.  The day the captain of the Wide Brown Land cricket team is younger than you is even scarier.  And the day the PM of the Wide Brown Land is only single digits older than you borders on nightmare territory.  But this?  This is JUST TOO MUCH.

Photo courtesy of our friends at Daily Beast

Travellers Pile on to Bangladesh Train on Special National Holiday.  What the hell do Harbour City commuters have to complain about?  Penthouse problems, people.

They may be trampy, but their larger and far less forgivable crime is that they are ugly

Target Slammed for Selling Trampy Clothes for Little Girls and Tweens.  And people are surprised about this?  Every time I’ve visited Target with the aim of purchasing for the JCCs, I’ve fled the store in manner of someone who’s been locked in a room with a severe flatulence sufferer, gagging on fumes of syntheticocity and cheapness — but, worst of all, unattractiveness.

Now, I know not everyone is as profligate in their spending habits as La Triv was before the Era of Frugality began yesterday, but people would do better to go visit La friends at Boden, or go elsewhere (and this is possible) for well-priced junior attire.  Pay more, buy less, buy better.  Target’s only selling the worst of this stuff because people with the worst possible taste are buying it.

“Bloody hell guv, I’m starved… reckon I could pop in and grab some diplomatic ceviche?”

Julian Assange to Run the Bill Gauntlet en Route to Ecuador.  This is going to be up there with OJ’s I405 dash in the white Ford Bronco.  The rozzas’ mission is to arrest Jules for breaching bail and then bundle him off to Sweden.  Jules’s mission is to get to Quito and kick back with his laptop and a canelazo.

“My ideal man? Hmm… possibly — how you say in English? — a ‘silver fox’, interested in computers, like me from the southern hemisphere…someone who likes to live dangerously a little…”

Maybe he could prevail upon his new Ecuadorian friends to facilitate an introduction to Miss Ecuador 2012, Carolina Aguirre Pérez, who has a declared interest in playing her part to bring about World Peace.  After all, dig deep and surely this is all Jules is after too.

UPDATE:  The Bill is apparently storming the embassy!  Or do they just want some ceviche?

And there you have it, all the analysis that’s fit to blog.  Consider yourself armed — and  dangerous.

Posted in Uncategorized. Bookmark the permalink.
← Clover Canyon in the Closet
Egg-citing times →