You know when you go to a party, soirée or luncheon and you see That Person in the corner?  You know That Person, the one captivating the attentions of all and sundry…witty, charismatic, knowledgable about all there is to know, in the best possible way.  Read on through Los Wrappos, and this weekend That Person will be you.

Harry Makes First Appearance Post Nude Romp — and Charms the Kiddies.  Regular readers would know La Triv has a soft spot a mile wide for Harry, who made light of his Vegas peccadillo with a bunch of sick kids.  Front-footed, very classy recovery Haz.  La loves that in this piccie he looks to have the same human touch with the common peeps as Diana.  Poor motherless child.

Clinton Romps it in For Barack.  The master orator at his very, very best.  PresClint’s full speech at the Democratic Convention is worth a look.  I know I promised no intifada chat or GFC analysis on this blog, but La feels it necessary to declare an interest:  here beneath los dusty rafters we’re hoping for Another Four Years.

Mrs O Issues Yet Another Call to Arms.   This woman, who is almost 50 years old, literally makes me want to get up off la squishy bum currently seated on la squishy sofa and start pumping iron.  She is ridiculous in her gorgeousness and fitness.  La minus los bingo wings…change we can believe in, indeed. 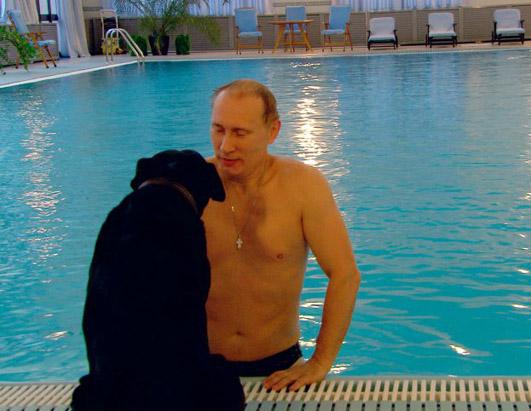 Putin Takes to Skies to Lead Crane Migration.  The Russian leader is, indeed, a friend to all creatures great and small.  Mad Vlad flew a motorised hang-glider to lead a flock of endangered baby Siberian cranes on part of their migration to Asia.  Apparently los cranes, “raised in captivity, do not know how to fly south, and environmentalists [had] to devise an imitation lead crane to show them the way.”  And that is all I will say on the matter for fear of La life; look no further than the cautionary tale of Ms Politkovskaya.

Maybe this is the kind of thing The Real Julia could do more of to garner a bit more electoral love..?

Antonia Kidman Urges Us to ‘Keep it Simple’.  The incredibly fecund 42-year-old, married to an investment banker and sister to a global mega-wealthy megastar, who lives in a city where it wouldn’t be unusual to have two live-in helpers, has penned (with ghostwriterish help) a tome telling us how we can all get back to basics.  Ploise — spare me.  I wish her well in her quest for literary success.  However, La would like to be the one to tell her — as mother to both Hamish and James — that she has given two of her offspring the same name.  Maybe number six can be christened Seamus to round out the trio.

Nasty Triv will turn off the ‘puter now and await her karmic retribution.