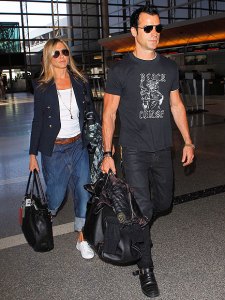 While we may have had past cause to question Jennifer Aniston’s taste in men (John Mayer, anyone?), we’ve rarely had a reason to question her taste in fashion.

Cop the nappy dacks!  What was she thinking?  And, equally importantly, what do you think Justin was thinking when he saw her appear in the doorway sporting those?  Think she asked, “Does my crotch look big in this?”  Think he said “No!”?

That said, La Triv poo-pooed the Boyfriend Jean back in the day, and now has two pairs of Current/Elliotts she loves, purchased after a directive received from La Gwyneth.

Still — if you see me in the Nappy Crotch anytime soon, feel free to take me out the back and shoot.